Do You Need A Light on While Watching TV? 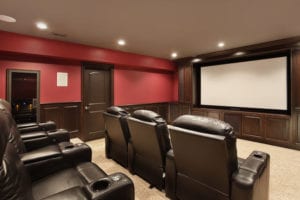 Sitting in a dark room, staring at the succession of bright and dark images coming from the television set is considered by many people to be harmful for the eyes, even though there is no scientific evidence to support the argument.

While there is no harm caused by a glaring television in a darkened room, spending a long time watching TV like this can cause eye strain and headaches in people who have light-sensitive eyes. The reason is the rapid succession of images and colors and the varying light intensity coming from the only light source in the room that causes the pupils to move and to adjust constantly.  Get subtle lighting options from a Centennial electrician to help eliminate the strain.

The easiest way to avoid such harmless, but potentially uncomfortable strain is to adjust the brightness of the screen or to simply turn on a dim lamp somewhere in the room. Another solution is to sit a little bit further from the screen than you normally would in a well-lit room. However, if you do not experience any discomfort, visual fatigue or headaches during or after watching TV in a dark room, you can continue to do so – you don’t need to worry about your health, your eyes will not be ruined.